The special drive launched by the Patiala Police and the Civil Administration in collaboration with the Health Department to motivate the people to get tested themselves for Covid-19 has received overwhelming response. Ignoring the rumors spread by mischievous elements about Covid through the audio and video messages that went viral on social media, the people of the district have come forward voluntarily and getting them tested for COVID-19 in large number. Thus Patiala has emerged as the district with highest tests per million population. So far over 1.40 lakh tests have been conducted in the district.

Patiala SSP Mr. Vikram Jeet Duggal who himself initiated the campaign to thwart rumors said that the district police under Mission Fateh had adopted various villages and colonies in view of the war waged by the Chief Minister Capt. Amarinder Singh against Covid and persuaded the people to come forward for testing to make the district COVID free. So far, 688 villages and 254 colonies have passed resolutions in favor of the tests and handed them over to the police, said SSP by adding that while more panchayats and colonies are also coming forward to pass resolutions for testing.

Mr. Duggal said that Patiala Police had launched a massive campaign to extend help to district administration and health department to curb the rumors and to restore the confidence of the people in the testing. He said to make the initiative a great success, every DSP and SHO have been asked to sensitize the residents and adopt a certain number of villages each to create awareness among the people about corona virus tests.

It is worthwhile to mention that SSP Vikram Jeet Duggal had taken the lead in creating awareness among the people that was started from village Ageta, (which had shown a negative attitude towards tests) was also the first to pass a resolution to co-operate in the testing of Covid. After this the villages and urban colonies of all the sub divisions of the district have started to pass resolutions in this regard.

According to the resolutions passed by the villages and colonies, they will get covid tests done and support corona fighters, doctors, paramedics, police and other health personnel. They also assured to support the front line Corona fighters in the war being waged by Chief Minister Capt Amarinder Singh under Mission Fateh against Covid. Mr. Duggal hoped that with the cooperation of the people, the corona virus would be defeated soon. 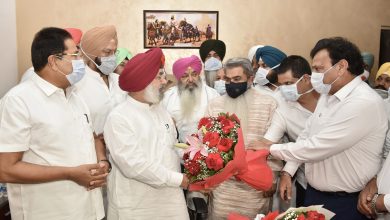